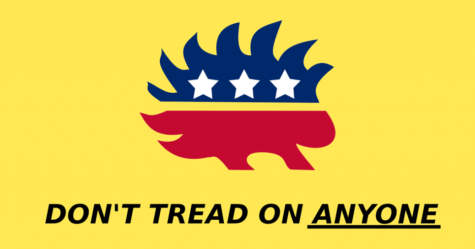 By Max Jonnaert | Editor in Chief

Voting left or right? How about neither?

The Libertarian Party made its’ greatest debut to the general populous under the campaign of Gary Johnson in the past 2016 election. Libertarians have been increasing in numbers in the last decade as more and more Americans find themselves disillusioned and dealigned with the two party system. This became very evident in the last election when the party gained the most support it has ever received; with many seeing it as the only viable option amidst the choice of two very controversial candidates.

And although the party has not been able to succeed in any major elections, the growing percentage of libertarian votes in the polls reflect a sentiment of wanting the party to take a position of power within the government.

Libertarianism is based on the principles of more power to the people and less power to the government for control and regulation. “I’m not all too familiar with the party, but I really like the freedom of choice that it promotes,” stated junior Isabella Salvagio. Politicians often like to simplify the ideology as socially liberal and fiscally conservative, which isn’t an entirely accurate nor fulfilling definition. Libertarians stress the ideas of freedom, privacy, and personal choice. They believe that the people will solve most social issues amongst themselves. If you as an individual want something like an abortion or to own guns, the party believes that such a decision should be left up to you, and you only. They strongly advocate for less government regulation in all sectors, especially in business. Fiscally speaking, they believe in fueling a strong economy that does not include welfare, and rather strives for individuals to thrive off their own achievement. Instead of relying on the government, libertarians promote being charitable and giving whenever possible to those in need. It is an ideology that promotes a strong military with a non interventionist policy.

So for a party with such a solid following and set of beliefs, it begs the question as to why the party has failed to influence any major elections. It can attributed to the electorate system of the United States that prevents all third parties from ever being a serious political threat. Under a winner-takes-all system within the electorate, the political behemoths of the Republican and Democratic Parties are able to utilize their immense funding and recognition to thwart any possible outside competition. It would take an immense movement and support to even win only a few major public offices for the party. Furthermore, third parties often fail to receive mainstream media coverage and access to televised debates because of their innate disadvantage to the two main parties. “I think that libertarians have a legitimate political ideology and claim to hold public office, but could never be a viable in this current political climate. Right now, it seems like it’s just a waste of a vote and it’s going to take some serious time and change to get them in a place of influence,” noted senior Tyson Mehrens.

In order for libertarians to reach the levels of power held by the Republicans and Democrats, it would require the party to gain immense public favor and votes. There are many libertarians who still run for office under one of the main parties, like Kentucky’s Republican senator Rand Paul. While they aren’t necessarily close to being totally legitimized, they have started in the right direction. It is also very likely that the party will gain more exposure throughout the years and could very well rise to being a legitimate contender in elections.