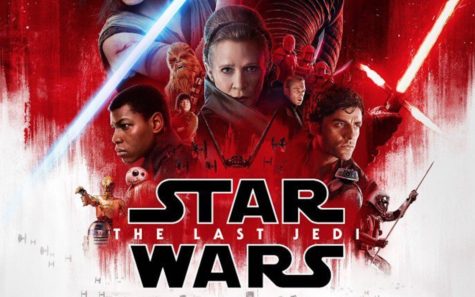 The following review contains spoilers. Read at your own risk.

An achievement in cinema, The Last Jedi spiritually revisits some familiar territory with a fresh new voice, despite posing some major questions.

The two year wait after The Force Awakens, the first addition to this new trilogy of Star Wars films, left many fans anxious to dig deeper into the new lineup of characters and plotlines, similar to The Empire Strikes Back and A New Hope. Many wondered if the film would suffer a sophomoric slump, especially due to a change in direction, after J.J. Abrams passed the torch to  former San Clemente resident Rian Johnson to executive his own artistic vision.

Needless to say, he executed.

From the first opening battle scene, perhaps one of the most thrilling space battles in the entire saga and certainly rivaling other iconic openings, it was evident that Johnson was in control of his craft, which is especially difficult in a franchise that deliberately resists individual authorship. Johnson’s incorporation of humor along with the intense takedown of the Dreadnought set the stage for a film that would balance both light-hearted, lovable dialogue, and emotional tension like that of the original trilogy.

Speaking of balance, Johnson utilizes his platform for creative implementation to the franchise by incorporating some major themes, a literary element that the franchise has, for the most part, lacked. One of the biggest emerging themes depicted was the importance of balance, whether through the force or amongst good versus evil. Johnson incorporates elements of balance on several occasions throughout the film, scriptly, when both Luke Skywalker and Emperor Snoke discuss the balance of the light side and dark, or visually, such as when Kylo Ren and 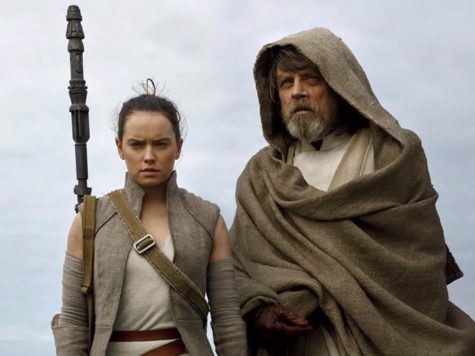 Rey’s equal power renders a floating lightsaber imobile in their effort to force-grab it.

Another major theme to emerge from the film is the dependence on hope. Like in A New Hope, The Last Jedi presents an outnumbered rebellion that depends on the hope to survive. Johnson eloquently draws a parallel between Princess Leia’s original request to Obi Wan Kenobi as the “only hope”, and now Luke Skywalker, who is emotionally stimulated when R2D2 nostalgically reminds him, and the audience, of his past.

But Johnson couldn’t do it alone; he had support from an incredible cast, whose characters have brought a level of fan affection back to the story after the lackluster performances of the prequels. Daisy Ridley returns as Rey, bringing greater depth and emotion to an already lovable character. The film premiered shortly after the passing of Carrie Fisher, who continued her legend as General Leia in perhaps her most chilling performance of the entire saga. Alongside Fisher, Mark Hamill continued the preservation of the original cast, despite having notably expressed his disdain to the public for the film and the new direction of the franchise.

Although no film is perfect, and The Last Jedi clearly embodies that statement with some obvious flaws, whether it’s the slow (and seemingly meaningless) storyline of Finn and Rose, or an awkward one-liner here and there, Johnson’s film is far from perfection. However, where the film makes up for its flaws is in its incredible moments, many which are arguably some of the best of the entire franchise. Whether it’s the completely silent montage of Vice Admiral Holdo’s kamikaze collision with the First Order fleet, or Luke Skywalker’s final moments of solitude in the sunset as he becomes one with the force, these are scenes that we will not soon forget as Star Wars fans.

What are students saying about the film? Junior Jake Brannon claims that the film “exceeded his expectations” while senior Nate Siebert explains that The Last Jedi is his “favorite movie in the franchise.”

While opinions on the film have varied, we will all now shift our eyes to J.J. Abrams, who directed The Force Awakens, to see if he can commit a smooth touchdown in bringing this saga to a close.