How do we determine qualifications for the highest position in the US government? Our democracy offers eligibility to citizens of at least thirty-five years of age— but does that mean just anyone can run for president? While it wouldn’t be democratic to legally adjust the eligibility for the presidency, it’s important as voters and citizens to consider the qualifications that we should look for in our candidates.

When Kanye West announced he hoped to run for the presidency in 2020 at the 2015 VMAs, he sparked a huge response from the American public. With the chaos of the 2016 Presidential Election just on the horizon, Kanye’s declaration seemed like a good reason to laugh amidst all the craziness. It seemed like a funny thought to entertain without the severity of real repercussions. 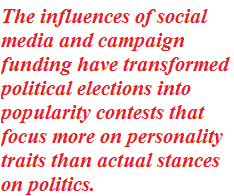 Over the last few years, our ideas surrounding qualifications and merit have shifted. The influences of social media and campaign funding have transformed political elections into popularity contests that focus more on personality traits than actual stances on politics. The greater the polarization of the Democratic and Republican parties, the less focus there seems to be on the policies themselves. The demand for previous experience is receding with time. What will happen to the legacy of the US presidency?

Oprah Winfrey prompted a standing ovation at the Golden Globes last Sunday with a powerful speech after receiving the Cecil B. DeMille Award for lifetime achievement. Her speech inspired a wave of Democrats supporting Winfrey for president in 2020. Now, sources report that she is “actively thinking” about running for the presidency.

Winfrey has solidified her reputation as a mediator on controversial topics and a role model for the American people. Over the years, her talk show has explored the depths of societal issues, from gender roles to civil rights and racial prejudice. She is talented, successful, and worthy of the admiration of the American people. As much as Winfrey is a role model for Americans, is she qualified to run the presidency? Have her talk shows prepared her for spearheading diplomatic relations with other countries and solving the problems we face at a national level?

Ulterior motives run rampant in any type of politics, but how does placing celebrities in high government positions solve the problem? San Clemente High School senior Ashley Echelberger recognized the value of celebrity influence in national conversation by explaining “it’s great that celebrities are using their platforms to voice their opinions about important issues in order to bring much-needed progress.” We should recognize the value of celebrities and public figures taking advantage of their platforms to speak up and encourage participation in politics, but that doesn’t mean they’re qualified to run the country.

Experience is a fundamental characteristic of qualified politicians. The idea of electing celebrities to government positions is just as problematic as a spoils system. According to senior Xavier Burke, “[celebrities’] opinions about politics are no better than those of their next-door neighbors.”

The fact that people are considering supporting Winfrey in a campaign for the presidency elucidates just how drastically political norms have shifted since the last election. For some people, the celebrities choosing to speak up for what they believe in are more appealing than the current politicians running the game. Nevertheless, as much as we might want to, is it logical to take politicians out of politics?

Politics shift with time, but it’s important for us to be aware of the changes we’re undergoing. While celebrities play an important role in society, the White House is not a place for child’s play. Let’s do our country a favor and reconsider the people we are lifting up to the presidency. Let’s rediscover the value of merit and experience in preparing an individual for a position as esteemed as the US presidency.

1 Comment on The Evolution of the US Presidency: Celebrity Intervention