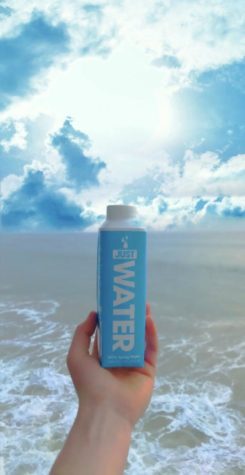 On Coastal Cleanup Day in 2016, plastic bottles were the second most found pollutant on our beaches, and plastic bottle caps were the third. In the United States alone, it takes fifteen to seventeen million barrels of oil to manufacture, transport, and dispose of plastic water bottles annually – that’s enough to fuel more than 1,000,000 cars for an entire year! Worst of all, scientists estimate that by the year 2050, there will be more plastic in our oceans than fish.

For these reasons and more, the Team Zissou Environmental Organization and Capistrano Unified School District (CUSD) have announced a partnership with JUST water to support a student-led campaign entitled #PlasticFreeCUSD. In a beta test during the week of January 22, the 100% pure spring water brand packaged in paper-based cartons will be added to the water bottle selection at San Clemente High School, Tesoro High School, Shorecliffs Middle School, and Ladera Ranch Middle School. Reliant upon student feedback to the new bottles, the end goal of the #PlasticFreeCUSD campaign is to transition each of the 60+ schools within CUSD towards plastic free campuses.

The bottle’s sustainable nature is complemented by its modern aesthetic. Team Zissou Core Leader, Flynn Lloyd, claims that “The design of the JUST bottle is much more appealing than traditional plastic bottles and will likely peak the interest of CUSD students.” JUST Water’s co-founder, Jaden Smith, created the bottle in an effort to make sustainability equally as appealing visually as it is morally. When discussing JUST’s relationship with Jackson Hinkle, founder of the Team Zissou Environmental Organization, Ira Laufer, CEO of JUST, stated, “We are honored to be partnering with Jackson, whose environmental efforts began in Orange County and have since resonated nationwide. We look forward to partnering with CUSD on a larger scale in the near future.”

The youth-led Plastic Free CUSD campaign is now entering its second year under the direction of the Team Zissou. The group’s Vice President, Cade Mills explains, “Plastic Free CUSD has been a long time coming. We have advocated this project on the district, city, state, national, and even international level – and have received widespread support on all fronts.” Given this initiative is a success, Team Zissou aims to evoke a Plastic Free movement that will spread to other schools across the globe.