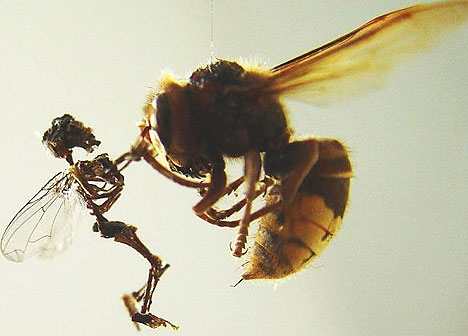 They took me in, they gave me the power to make a change. They were like ants, working in concert like mindless cogs in a gargantuan machine. They were born a stark white, but within days they turn to a Technicolor mess. My time with them led me to new understandings.

They would work to overcome obstacles in a way that had never been seen before. The swirling hairs on their forms would link together, creating something larger. They would turn from a dozen pieces of a machine into a single piece, preform the task, then fall apart again.

Innumerable years of adaptation and survival had resulted in such a perfect machine that even massive loss didn’t faze them. I witnessed a plague spread through them and they lost almost a fourth of their numbers. They had recovered within a week.

I called them The Hive.

They seemed to rejoice in their new name, as if they sought my approval. Their incredible inclination towards my thoughts seemed to increase with time. Had they never experienced free thought?

They finally took me to a higher floor, into a large chamber. The intricate carvings on the chamber walls seemed like a history of their existence, but had been continued over itself with no regard of keeping what was already written. In the center was a larger version of what I had been with while here. It was a leader, or at least something more than the rest. The massive form didn’t acknowledge me as I entered. The smaller creatures seemed agitated by the hulking thing. They seemed to want it gone, and the simple nod from my understanding of this was enough to set them off. They charged their supposed leader and dragged its squirming body from the chamber. Their screams, if you could even call them that, that came from it were ones of terror and anger, something I hadn’t thought possible of these simple creatures. The ones that remained seemed to lower themselves, and while I feared another attack, one came forward, holding a small orb. It thrust it into my hand and snapped its jaw, as if trying to eat. They wanted me to consume it. This sphere, most likely taken from the gardens I had seen from the lower floors. They all watched, and I bit in. My mind felt a grand hellfire rage inside of it, the searing pain tearing my mind apart.

The feelings dulled, and I knew. They had made me into something more than I already was. I had learned what they were, what they were for. They had been created, like me, from the madness of the shadows, and left in the care of the creature they had destroyed. The shadow had chosen it, but they had chosen me. I could access them all. Their thoughts and actions. Nothing about them was hidden from me. They were mine now. They were vessels for any information I wished to store. They were tools for any task I wished to accomplish. I could see the things that the dethroned beast had done. It had brought the plague that destroyed them. It had done things that benefited only itself, not the rest. It had not served The Hive.