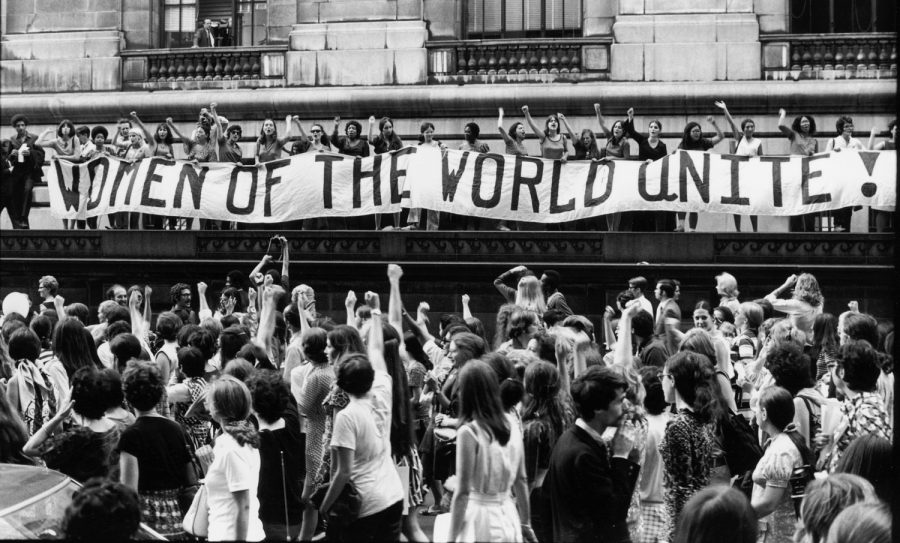 My favorite “f-word” is feminist, which means I believe in equal social and political rights for all people, everywhere, regardless of their gender, race, or sexuality. It does not mean I hate men, or women who wear lipstick, or stay-at-home moms.

Still, when I tell some people this, they get this look on their face like they’ve swallowed a lemon—or something equally sour. To some people, feminist is a dirty word.

I am a feminist and here’s why:

I am a feminist because I am eighteen, living in California, and attempting to navigate the maze of high school. For the most part, my life is normal. I worry about the prom—if I’ll get asked and what to wear—and I worry about my grades—where I’ll go to college and what I’ll do before I head into the real world.

Most of all, I worry about being a girl.

In the walls of my high school, there are many like me, with the same trivial fears, but also a deeper anxiety.

On the bathroom stalls of my school, there are flyers that advertise “Free Self-Defense Classes for High School Girls,” in big, bold letters.

There are no flyers in the boys’ bathrooms.

In health class we learn about the mysterious, tasteless drugs that someone can slip into your drink. The scientific names for date rape drugs, like GHB and Rohypnol, become “roofies” and “roaches.”

I am a feminist because my health teacher tells us girls that if we leave our drinks unattended, we shouldn’t pick them back up. Do not trust stranger’s parties; that brings more harm than fun.

My teacher doesn’t tell boys not to drug girls.

I am a feminist because my freshman year I did a research project covering the growing epidemic of sexual assault on college campuses across America. I remember being fifteen and scared to go to college—scared that I would be that 1 in 5 who doesn’t watch her drink; who has to worry about watching her drink and is still assaulted anyway.

And it’s more than just parties, or school. It’s across the country.

I am a feminist because Brock Turner, a former student at Stanford University, was convicted of sexually assaulting an unconscious woman on the night of January 18, 2015; no justice was served. ³ Emily Doe, the pseudonym of the woman assaulted, gave a heartbreaking statement about the events before and after she was raped. As she recounts her morning and the breakfast she ate—she sounds like a normal girl. She goes to a party with her sister, and she drinks too much. She does not remember what happens during her unconsciousness, she only remembers what happens after: “I wanted to take off my body like a jacket and leave it at the hospital with everything else.”³

I am a feminist because Brock Turner was tried and found guilty; he served three months of his six months sentence before he was let out on good behavior. Meanwhile, Emily Doe’s body does not feel like her own.

In California, possession of marijuana with intent to sell is a minimum incarceration of six months. I am a feminist because people ask for drugs, no one asks for rape, but the former receives a harsher sentence.

I am a feminist because it’s been 99 years since women were given the right to vote, 55 for African American women, but we’ve never had a female president.

I am a feminist because I am eighteen, living in the United States, and attempting to navigate the confusion of laws and problems plaguing my country.

And, while I try to navigate my future, in my own country a girl just like me has already had her fate decided for her.

According to Unchained At Last, a nonprofit organization that fights for women and children forced into arranged marriage, 2017 data reveals that “248,000 children had been married in the United States between 2000 and 2010, mostly to adult men.” ⁵

I am a feminist because my own government is taking steps to defund Planned Parenthood, another nonprofit that aids in providing reproductive health research and medical assistance like pap smears, STD testing, and birth control, not just abortion.

I am a feminist because a gun is more protected than children in the United States.

And it’s more than just this state, or country. It’s around the world.

A Global Report on Trafficking in Persons by the United Nations Office on Drugs and Crime gathered data from 155 countries, documenting the most common form of modern slavery: Human Trafficking.

I am a feminist because female genital mutilation is still performed in 29 countries to prevent promiscuity in young girls once they are deemed of age; patriarchal rule decides that male sexuality is more important than the natural development of female bodies. ⁸

I am a feminist because, just because it’s not happening to me, doesn’t mean it’s not a problem.

Feminist is not a dirty word.

⁵ Reiss, Fraidy. “Child Marriage Is Happening at an Alarming Rate across the US.” CNN, Cable News Network, 16 Nov. 2017, www.cnn.com/2017/11/15/opinions/moore-case-spotlights-risk-to-young-girls-reis/index.html