PRINCIPAL’S OFFICE – these two daunting words can instill fear into the hearts of any student.

Thankfully for me, our new principal Mr. Halt greeted me kindly and graciously when I stopped by his office for an interview. Hailing from the Atlantic seaboard, he comes to San Clemente High School with a ton of experience, both in education and administration, totaling over 20 years! 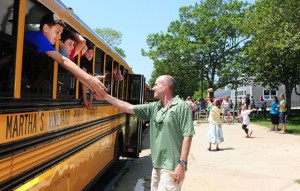 It wasn’t until the new millennium that Mr. Halt entered into the world of administration as an assistant principal at Martha’s Vineyard Regional High School. Four years later he became principal at West Tisbury School – a K-8 school also in Martha’s Vineyard. During his nine year tenure at West Tisbury, Mr. Halt was awarded the Governor’s Commendation for Achievement in 2012 and was named a pilot candidate for National Board Certification for Principals.

“I have worked at a lot of good schools,” Mr. Halt said. “But the difference between good schools and great schools are how people treat one another and the pride in the school. San Clemente High School is a great school.”

Thus far, Mr. Halt has marveled at our school’s sense of community saying, “I especially love the interaction between the faculty and the students.” Adding also that he appreciated the “…openness and friendliness of the students here. I have never seen such gratitude and appreciation from students.” 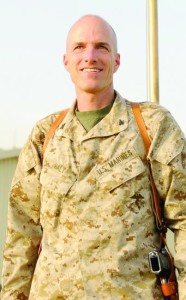 A sense of appreciation and respect are qualities that I’m sure Mr. Halt values very highly due in part to his background in the U.S. Military, becoming an active duty Marine officer in 1987. He served as a combat leader in the First Gulf War, where he earned a Combat Action Ribbon and a Navy Commendation. Since 1992, he has served in the Marine Corps Reserve. During his post-9/11 tours, he deployed to Iraq and Afghanistan, earning a Bronze Star and the Legion of Merit.

Despite working all over the country and serving in all over the world, Mr. Halt says the toughest part about the transition to working at SCHS is the school’s large size. “My biggest struggle has been getting to know everyone, because SCHS is such a big campus”, he affirmed. Also, he stated that he likes to make personal connections, and one of his goals for this year is to spend more time observing in classrooms in order to meet more students and staff.

Later I asked Mr. Halt about a highly controversial topic in the educational world today – Common Core. “I like Common Core,” he said. “I think that it’s more liberating and enjoyable.”

Mr. Halt believes that students and teachers will benefit from these new teaching ideals, because it will focus more on the learning process rather than the learning product. He says Common Core will also “…prepare students with twenty-first century skills that are desperately needed in the world today, like problem solving, creative thinking, collaboration in groups, and innovation.” Adding definitively “…education needs updating!”

An update is what I am most excited about with the new administration here at San Clemente High, bringing a positive, fresh, and focused approach to the new school year.

So if you’re nearby the office or see Mr. Halt around campus, introduce yourself and see how interesting and impressive our new principal really is.