Below is a speech I wrote for my school’s anti-bullying assembly in seventh grade. It promotes awareness of the hate behind the word “retarded.”

Here’s a question that you probably know the answer to: What would you do if someone insulted your race or your gender? Well, you would probably correct that person in the best way you know how – by telling a teacher, by calmly explaining to them exactly why they are wrong, or by simply punching them in the face.

Now, what would you do if someone insulted the most innocent members of our society by using the word “retard” inappropriately? You would laugh.

For reasons I cannot fathom, nearly every person in our society laughs at this word – this joke.

Why is it funny to hurt a person who would never hurt you? Whose only wish is to be accepted by the world, to have a chance of success equal to the person who stares at them and judges them because they are different?

“Retard” has become far too common a word in our vocabulary. Perhaps this is because there are so many things about special needs people that are different from typical people. But is that not how racism started? Because of a difference that was not chosen, that cannot be controlled? Didn’t we put an end to that kind of hatred decades ago?

Apparently not as people in this school still use the word “retard.” My classmates say it. My friends say it. Few teachers ever reprimand their students for saying it. Everybody seems to say it.

Well, to me, and in my house, the word “retarded” means my little sister, Peyton.

Every time I hear that word, I picture my eight-year-old sister, with her sparkling blue eyes, her sweet face, and her pink lips that will never form words because she was born with Rett Syndrome. 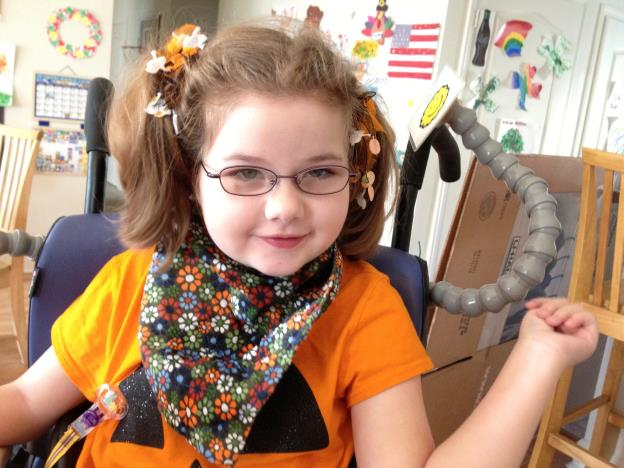 So when you call yourself retarded, you’re also calling my sister – and all people like her – stupid.  Because you use the word as just that – another form of stupid.

My sister is not stupid.

She may never be able to walk or talk, she won’t ever live on her own, but despite what your initial reaction might be, Peyton is very smart – maybe even smarter than us. She understands better than anyone the importance of judging a person based on their character, instead of on their appearance or what they can and can’t do. She fully comprehends every word said to her, even if she can’t respond. Yes, she is a human, with thoughts and feelings and a disability.

I did not choose to have a handicap sister. My sister did not choose to be born with a syndrome that keeps her from talking, that causes her unimaginable pain, and that prevents her from experiencing life the way she deserves. And yet, every morning when I walk into her pink room to greet her, she is smiling at me and laughing at the small joys around her.

The next time you say the word “retarded,” I hope that you will think of my sister, and of all the people like her in the world, who do not deserve to be jeered at or made fun of simply because of their disability that they cannot control.  The next time you say “retarded,” imagine how you would feel if someone insulted you and you were utterly powerless to defend yourself.