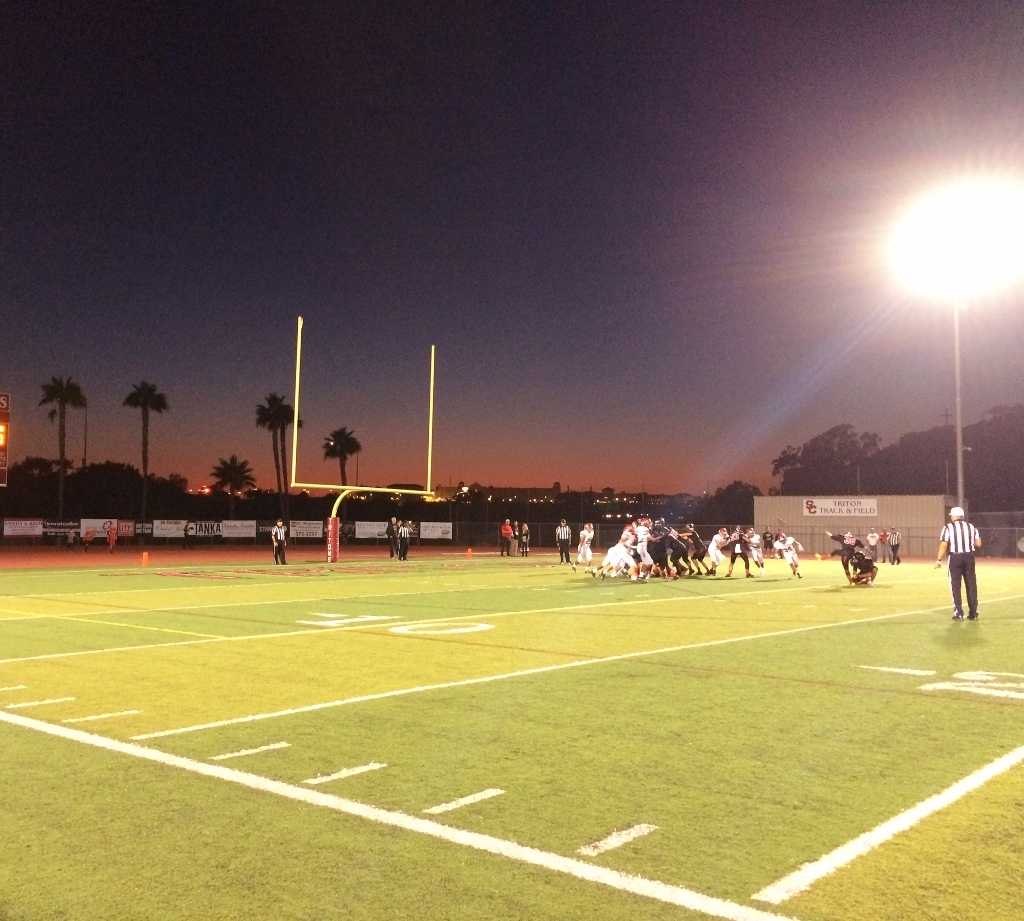 The resounding phrase of “one town, one team” echos through San Clemente once again as the Tritons approach their football season. The team began the season with a tough loss against the Oceanside Pirates, ending with a score of 51-42. Hoping for redemption, the Tritons played the Huntington Beach Oilers, winning by a landslide, finishing the game with a score of 38-13. Now in the prestigious South Coast League, the team has a lot of work ahead of them. When asked how he felt about moving into the higher league, junior, and tight end, Chris Kane said, “It’s exciting to have tough competition, and to play better teams.” Like Kane, the football team hopes to work hard and pull ahead in this new league.

After a difficult battle, and a heartbreaking last ten seconds, the Tritons came up slightly short to the Oceanside Pirates. “Offense played a really good game and we put up 42 points, there is much to look forward to this season,” according to Kane, who chipped in by catching a pivotal touchdown. The game consisted of the two skilled teams constantly evening the score, until Oceanside began bombarding the defense at the last minute. San Clemente’s defense kept them from scoring, however, with only ten seconds left, Oceanside’s wide receiver, Jake Gerardi, caught the ball in the end zone for a game-winning touchdown.

After dominating the entire first half, the Tritons went into the locker room with a 28 point lead on the Oilers, who ended the first half with 0 points. San Clemente kept their lead, only allowing the ball to enter their end zone twice, resulting in 13 points for the Oilers. Despite Huntington’s sudden scoring, the Tritons were able to keep up a strong defense, and prevent the competition from scoring any more. Additionally, Triton offense was able to counter to the Huntington points by getting 10 of their own. The San Clemente Tritons ended with 25 more points than the Huntington Oilers and a 38-13 win.

After eleven seconds, the Tritons were able to score their first touchdown of the game, putting them on the path to a win of 63-3. Quickly pulling ahead, the Tritons put up a strong offense against the Rough Riders, ending with a total of nine touchdowns. The defense also came out strong, only allowing one field goal and getting a touchdown of their own by Taylor Scott, who returned an interception. All three Triton quarterbacks contributed to the win, with a total of 263 passing yards. When outside linebacker Ryan Russell was asked what Roosevelt was lacking during the game he said, “Numbers… Those kids, despite being the underdogs, came out and played tough throughout the whole game. They could’ve just layed down but they kept battling to make themselves better.” This win puts the Tritons on their way to a successful season in the South Coast League.

These two most recent wins are setting the Tritons up for what will hopefully become a winning streak by giving them confidence which Russell says, “will be crucial as we move forward into league and battle for a title.” Be sure to go to the next home game on September 23, this Friday, against Palos Verdes to be a part of the Loud Crowd student section and support San Clemente High School’s football team!