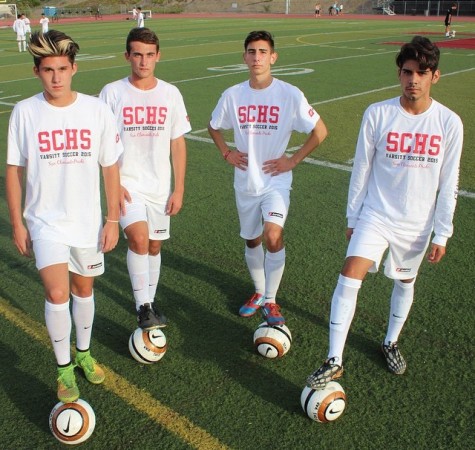 San Clemente Boys Soccer has the makings of another great season, as they work to fine-tune an already impressive start to the season at 14-5-4 overall and 6-0-2 in league.

“It has been a road to a good season so far,” said senior Joe Iorio. “We’re playing for first place in league and already clinched a spot in CIF!”

The boys of San Clemente have an outstanding average this season of 36 goals. senior forward, Matias Ledesma is on a roll leading the team with 11 goals throughout the season. Closely falling behind Matias is sophomore mid-fielder, Tyler Bagley with seven goals this season. Eddie Molina does not fall far behind Ledesma and Bagley with a total of five goals and six assists this season. Closely behind Molina are senior, Joe Iorio and sophomore, Bryan Calderone with three goals each and one assist.

On February 10, 2015 at Mission Viejo High School, the boys soccer team came out on top. Senior, Ledesma scored a total of two goals against the Mission goalie, Hampton Irwin. Following Ledesma was Iorio and Calderone each with one goal. This was a crucial win as it boosted the team’s confidence for the big game!

The Boys soccer team has a good chance of earning the title of league champions in their next game. It will be the deciding game to whether or not the boys will bring the championship home or not. The game will be at home on February 12th. The game will begin around 4:30, at Thalassa Stadium. Our competing rivals that night for the league title will be El Toro High School.

Come out and support our Triton Boys Soccer Team and help them clench the league title!