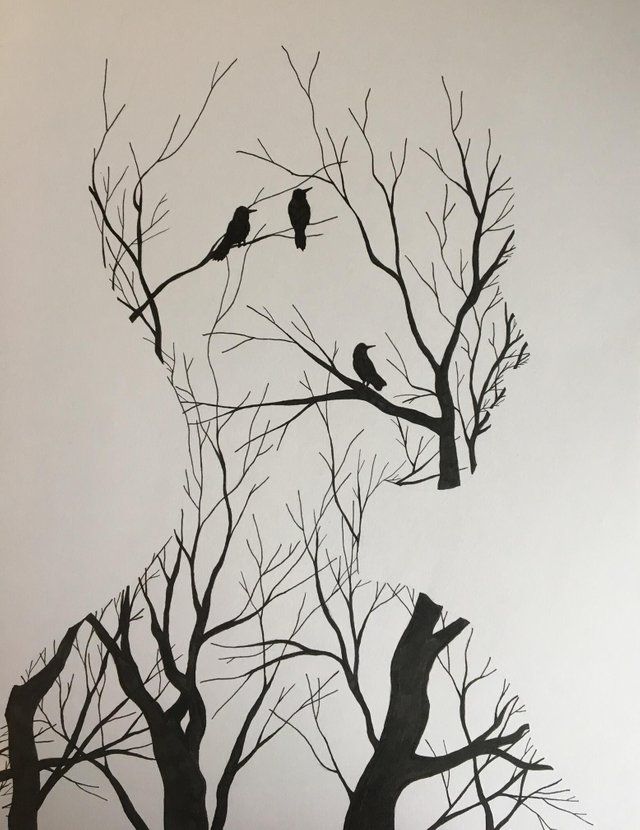 Melbourne was a medically certified giant; doctors told him he would grow until he died. When his mother heard this, she decided to leave the convent where she had raised Melbourne and bring him with her to the woods. “My boy will be Paul Bunyan,” she declared to her fellow nuns. They looked on with quiet pity for the boy as he was pulled along by his mother’s hand. Unconventional as it were, the nuns enjoyed having him around. Melbourne was gentle and quiet, unlike his mother. She was a loud, harsh person who was only a nun because her father had left most of his land to the convent so that she could live there. She had arrived pregnant, but claimed a virgin birth to spare herself a little dignity. The nuns worried for the boy as he left, but were thankful for the peace that followed his mother’s departure.

Melbourne thought the woods were strange. They lived in grandpa’s old cabin, which he found much less pleasant than the convent. He had only ever known nuns, and he missed them— even if he didn’t miss their rules. Mother had always been the meanest of them, and yelled constantly with her scrap metal voice. Melbourne was put to work almost immediately, but struggled because his condition also affected his eyesight. However, he could see the trees well enough, and he became very fond of the ones around his new home. The convent didn’t have any trees, but the nuns often told him he looked like one. Now he understood what they had meant. But a body like a tree was not good for cutting them down, and his mother screamed at him when he couldn’t even lift the axe above his head. When he was little, she used to be able to make him cry just by looking at him; but now that he couldn’t see well, only yelling did the trick.

It was better crying in the woods than at the convent. It was quiet, and there weren’t any nuns that came up and bothered him about it. Melbourne would sit and cry and listen to the trees, wailing as the wind rocked their boughs. The pain he heard when the trees cried was the same as his own, and he would ask what was wrong but could never hear their replies. When his mother would call for him from the cabin, the trees would soften her hard voice, as though to protect him from her. He always thanked them when they did.

Melbourne became more and more like the trees, and less and less like the Paul Bunyan of his mother’s dreams. After a year, she gave up on making a lumberjack out of him, and went and found one instead. She married that lumberjack, and he started cutting immediately. Melbourne went completely blind, and his body got so large and thin that its own weight was almost too much for him to handle. Melbourne hated to hear the trees cut down; the axe blows sounded like brutal, blood curdling screams to him. He started living in the forest, where he could listen to the trees without hearing the drunken arguments of his mother and the lumberjack. His skin became dirt brown, and scruffy hair gradually enveloped his face, chest and limbs.

Time went by and the lumberjack kept cutting down trees and Melbourne kept growing and his mother kept yelling. She mostly yelled at herself now, since the lumberjack spent his days with an axe and his nights with a bottle; and Melbourne had been all but forgotten by the two. He learned to sleep standing up since his joints hurt so bad, and eventually he stopped moving altogether. His bare feet sunk into the earth as he kept growing. He wasn’t sure how tall he was, but the trees’ once-distant voices were right in his ears now.

On one night, the yelling got so bad in the cabin that the lumberjack left to take his anger out on a tree. The sky was breathless and clear overhead, and he dragged his feet while a glint from the moonlight jumped back and forth between a whiskey bottle in one hand and an axe in the other. He’d cut down all the trees within a hundred feet of the cabin, and the one he picked for tonight stood just beyond the field of rotting stumps. Swing after wild swing gradually cooled him down. As he drove his woes deeper into the wood, he noticed a strange sound coming from the towering tree. The lumberjack thought it must be creaking, and that meant it was close to falling.

Melbourne’s mother came just in time to watch her son fall through the air. She had heard him crying out in agony, his voice so deep that she had hardly recognized it. The lumberjack mumbled a few curses when he saw her before passing out under a tree. She tried to scream, to let her horror escape into the air, but found she couldn’t speak. Folded over the bearded face of her child, she heard the terrible cries of the trees, the ones Melbourne had always talked about. She listened now to their voices. As she did, she recognized her own voice yelling among them, hung like a wet rag from their branches. The voice the trees had only been able to soften was now theirs, stolen as it dealt its final blow. It was better crying in the woods.