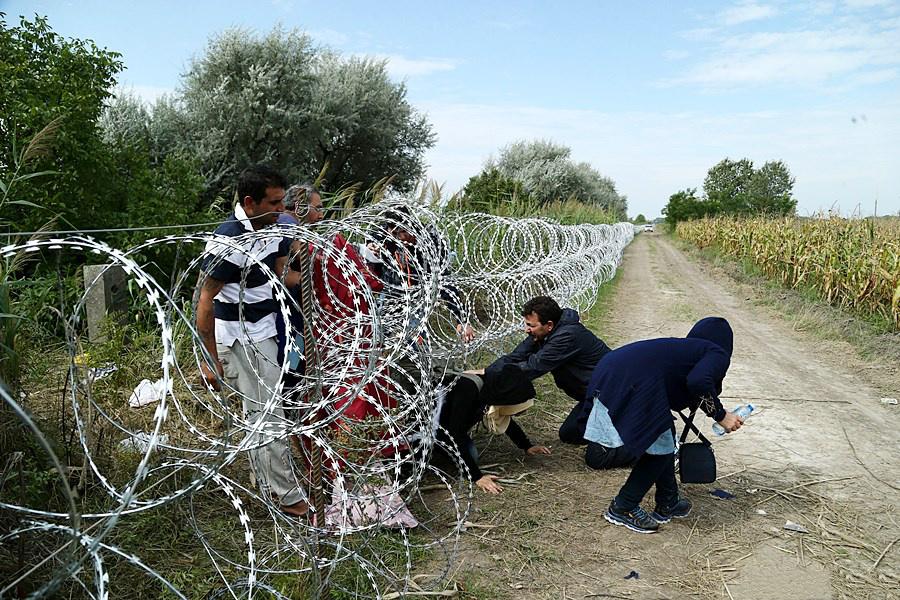 As the Syrian conflict intensifies and war continues to solidify itself as a Middle Eastern norm, migrants hoping to resettle in Europe once again flood borders and strain not only the continent’s resources, but its union. While many have been open to taking in those displaced by the Syrian Civil War and other fighting in the region on humanitarian grounds, there are significant numbers of people who fear migrant populations will inundate countries, alter cultures, take jobs from civilians, and incite crime.The prominence of Islamic terrorists on the world stage and their role as a driving force behind a significant portion of the world’s unrest has contributed to a perception of these new migrants, who celebrate cultures and religions alien to many Europeans, as disruptive.

San Clemente High School sophomore Katee Fairon recognizes this wariness, saying “While I feel that Europe should help them because of the conflict in their homes, I can understand why Europeans would be nervous with the recent terror attacks.”

This suspicion has led to popular opposition to the growing influx of migrants on both social and political justifications, feeding into a crisis of many dimensions that threatens to both destroy the fabric holding the European Union together and repopularize forms of xenophobia. Far-right political parties have gained ground, most notably in European powerhouse of Germany.

The debate, being subject to politics, is highly moralized and thus contentious. The fundamental question being posed that has received such vehement and varied response is this: should European countries perform their humanitarian duty and help a people largely without a home or a place to go, or should they honor the potential risk it poses to national security and protect their current citizens?

The question is laced with potential for religious and cultural prejudices, many of which have emerged amidst the growing risk posed by terror groups and the seemingly unending migration of Middle Eastern populations to Europe. Armed militias have established themselves throughout Europe, declaring their goal to protect the women and children of their communities from the supposed danger of migrant populations. As Germany, the one major country that has fully embraced assisting the migrants (in terms of government) is overwhelmed and other countries refuse either to expand or fulfill their quotas, many wish for the construction of barriers to keep migrants out and creation of harsher immigration laws in efforts to preserve German culture and national identity as it is. Similar patterns of popular opposition have taken hold throughout Europe.

While politicians struggle to preserve good relations with other nations while stifling the popularity of neo-conservative movements domestically, the refugees are looked upon both with sympathy and apprehension. Triton sophomore Chloe Patterson notes, “It seems difficult for countries to fill quotas when people are against it.”

The need to find a solution for the growing numbers of migrants has divided the European Union and emphasized the extent of  discord that has  incited some pundits to question the fate of the E.U.  As the debate between whether nations have an obligation to take in or keep out people heightens and terrorist attacks foster paranoia and anger, Europe is locked in an ideological and political stalemate driven by different perceptions as to what is just and humanitarian: protecting current civilians from the possibility of increased terrorism or hosting those whose own countries are stricken with annihilating war.

As the continent struggles to safely navigate the crisis, it must take into account the growing conservatism of its people (and that of  its own current policy). It is vital to address the deep-seated fears of Europe becoming a melting pot with nuance and respect for both parties. The long term benefit of diversifying a culture (added intellectual power, etc.) should be emphasized, along with a commitment to a plan for moving the refugees back once the conflict in the Middle East subsides.

Moreover, it is important to realize that it is unrealistic to fully suppress the wave of migration and that such policy would further weaken border countries already buckling under the weight of both hosting migrants on their trips deeper into Europe and the stress and commitment of holding them out. In order to prevent a swing in balance of power due to weakening of border countries such as Greece and its neighbors, Europe must, at some point, put aside its domestic problems and embrace some semblance of a quota program. While already tried by the E.U. and failed, it is one of the only realistic means by which a crisis of such extensive proportions can be alleviated. Countries should take in a number of migrants in correlation to that nation’s overall wealth and stability.

Many dispute that this is a viable solution, believing that the E.U. will crumble before they all can unite for a common interest. Nonetheless, placing the burden on a few isolated countries fosters instability and weakness, as seen in resource-strapped border countries and the growing discontent in Germany for Angela Merkel’s migrant-friendly leadership. Isolating such countries, including the pivotal Germany, contributes to a gradual decay of the European Union that, while not as apparent as the situation predicted by some, generates the same results and the potential for radicalized government in these areas. While political nuance is a great manipulator of policy and will largely determine how Europe chooses to deal with the crisis, a tangible compromise must be reached if governments look to prevent an irreversible animosity between civilians and refugees.