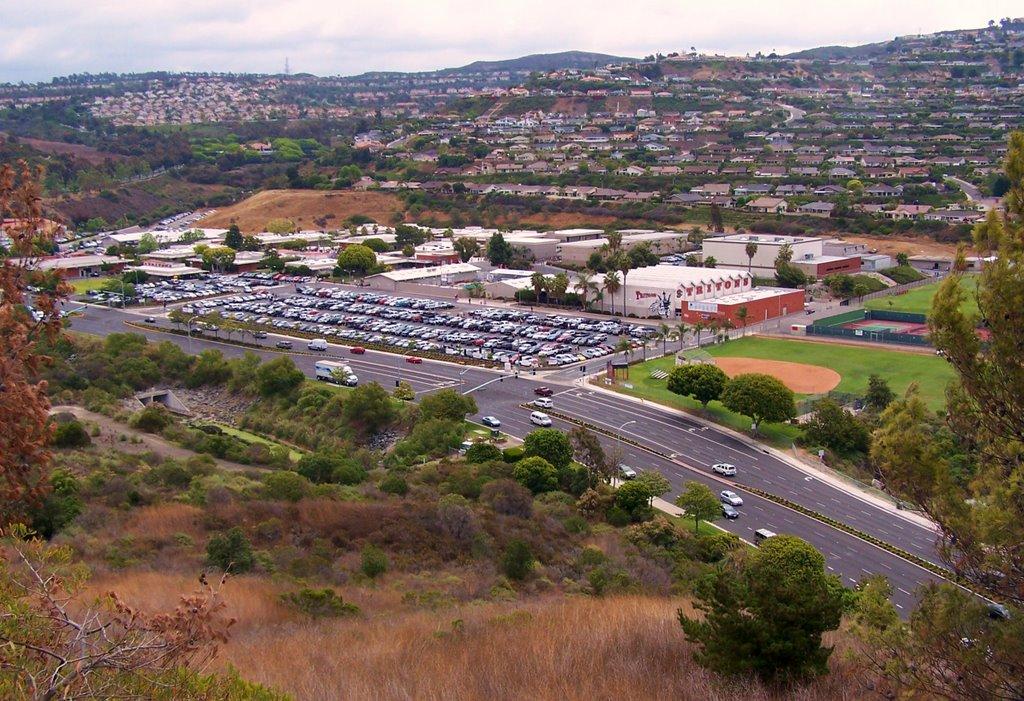 Education has long proven itself to be at the heart of every prosperous community. It cultivates self-awareness, opens the door to innovation, and prepares the youth to accept the adult burden of crafting the future. Education allows one to mold the world with his or her own hands and bring revolutionary visions to life. It connects the individual to the outside world and forms globalized communities vital in the ever-evolving Information Age. Without such a vital instrument of societal maintenance and progress, society is left stagnant and unadorned by trailblazing ambition and new ideas.

Southern Orange County has long prided itself on a venerable public education that gives each student the opportunity to bring tangibility to their dreams. However, age has recently started to challenge this standard 16 years into the new century. 70% of Capistrano Unified School District classrooms are at least 20 years old.

Having recognized the disparities in facility quality, the school district has proposed Measure M, a $889 million bond whose funds would be allocated towards the repair of classrooms, replacement of leaky roofs, removal of asbetos, the construction of facilities that can support student preparation for college, vocational, and military careers, the improvement of STEM (science technology engineering and mathematics) labs, and the construction and upgrade of  art and music spaces. The District has also announced that, if passed, there will be oversight to ensure transparency and appropriate allocation of funds. Annual independent audits, the establishment of an independent citizens’ oversight committee, and a stringent restriction against raising teacher or administration salaries are all components of a plan to secure public trust.  A 55% majority is needed to pass the measure into law.

Although the value of education is regarded with some consensus, the institution ignites passion that has led to a schism in public opinion regarding how education should be improved by communities. Measure M has incited a polarizing debate punctuated by two firmly established “Yes” and “No” camps.

The “Yes” group contends that by funding education, Measure M is an indirect investment in the local economy. The rationale is that higher quality educational facilities will be attractive to prospective buyers and raise property values. As student supporter Katee Fairon, 11, shares, “it would make sense that better schools would attract more people to San Clemente and other towns. Schools are important to parents.”  Moreover, the group has noted that the measure meets the Orange County Taxpayer Association’s standard for transparency, affirming that the measure requires no unreasonable tax hikes.

President of  Capistrano Unified Board of Trustees Amy Hanacek vouches for the measure’s necessity, sharing, “Personally, I feel this is my responsibility to bring this opportunity forward- our facilities are not improving, California funding will probably never change in our lifetime, and CUSD students deserve to be able to compete equally throughout this district and with neighboring school district students. Tustin Unified has passed three bonds since 2012 and their schools are state of the art marvels.”

Nonetheless, the scope of the measure has concerned throngs of public officials who fear the measure will raise property and income taxes beyond the threshold of affordability for the average citizen. Proposition 30 is often referenced as foreshadowing for Measure M’s consequences, as it raised sales and property taxes without remarkable improvements in education.

The “No” camp’s website, located at therealcusd.com, declares that the measure would remove “1.8 billion from the economy for at least 25 years,” a significant amount of money no longer available for home and business investment. Its list of reasons to oppose M also includes that “The Board could vote to spend all the bonds in 2-3 cities or even 1 city” and that there are are scarce regulations on the application of funds. While the measure will necessitate a raise in property and sales taxes, among others, the majority of their fundamental claims regarding how the money would be used are flatly contradicted by the fact sheet available on the district’s website specifying that funds can only be used on district schools and cannot raise teacher/administrators’ salaries..

Nonetheless, there are citizens who ,although open to an increase in taxes due to the abysmal condition of some campuses, including SCHS, are still wary. Some fear the schools that genuinely need the repairs will be snubbed or that money will be concentrated in a few schools or single town. Such anxieties are not unfounded, as there is a substantial difference in the quality of high school campuses alone in Capistrano Unified School District.

Capistrano Valley High School is home to a multi-million dollar performing arts center that supports a plethora of visual arts programs, from a multi-faceted drama program to established vocal and instrumental arts programs. San Clemente, however, is host to an array of aging classrooms and lacks similar facilities for its arts program, narrowing the scope of its teachers and students’ capacity for expansion and development.

Choir student Kathryn Thompson,11, who spends time in San Clemente’s equivalent, The Triton Center,  notes “I really hate the seating situation. I’m not really sure what they could do to fix that, maybe raise the stage? Not likely though.” She adds that “The dressing rooms of kind of outdated” and that “a new paint coat might be nice.”  While such criticisms appear trivial, the underwhelming condition of the Triton Center raises eyebrows when compared with the state-of-the-art facility at CVHS. If a school does not have the proper tools, it cannot construct the same intellectual and creative establishments enjoyed by better-equipped schools.

There has been visible discrepancy in which schools receive the most funds, a recent pattern of district spending that leads one to doubt the district’s assurances that sufficient money will reach the schools in direst need. However, SCHS Principal Chris Carter maintained that San Clemente and other schools with aging facilities would be a district priority should the measure pass.

CUSD Head of the Board of Trustees my Hanacek also assures “The Board will be directed by the work performed by the established community oversight committees.” She maintains that community activity is integral to establishment of trust and satisfaction with the funds’ management, asserting that she “can’t control those that don’t participate in the process or do their homework in what work is being performed, but still decide to complain- we are committed to our due diligence and have an open door to participation for all.”

Should the measure pass, the funds would be foremost directed towards mitigating public safety concerns in classrooms before branching out to requests specific to each school. As Principal Carter outlined in San Clemente’s personal priority list, “Number one is upgraded classrooms. That’s key and most important. We would like to see our classrooms be more 21st century.”  The District would prioritize the needs of the oldest schools, many of which concern infrastructure deficiencies among which include plumbing, leaky roofs, and broken HVAC units (air conditioning) that threaten a basic learning environment and, in some casese, student safety. San Clemente’s personal list of District requests is extensive and reflects the school’s desperate need for renovations. It covers fundamental fixes listed above before expanding to a variety of other projects. The plan also involves reconfiguration of the campus for easier student access to classrooms and perks like a central cafeteria, along with renovation of  student bleachers to meet disability standards.

Beyond these necessities, the “big projects” SCHS Principal Carter feels are necessary for the school to remain competitive are a performing arts center and 50 meter pool. Carter says “We don’t really have a place for our performing artists to perform in an adequate and appropriate setting.” The pool in turn is deemed “no longer a viable pool even for CIF.” Carter also elaborates on plans for a modern library/media center, a better nurse’s office, upgraded restrooms, and a waiting area for students in the administration building when meeting with counselors. The grand total of this exhaustive framework for school improvement rests at approximately 91 million dollars. The pool and surrounding locker rooms would cost between roughly 10-12 million and the performing arts center would be expected to cost between 15-17 million dollars. While the numbers seem large, they are reasonable estimates and could largely be covered by a bond of relative size. 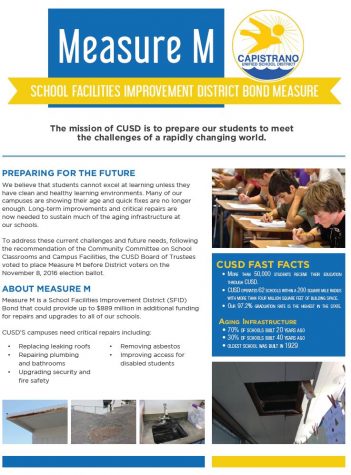 Should Measure M pass, this plan could transform a feeble school defined by peeling, slumped buildings and scarce technology into a modern and developed institution ornamented by well-equipped facilities and comfortable learning spaces. As property taxes from new San Clemente communities funded the auxiliary gym and is currently funding the 24 classroom project in the old gym parking lot, it is tantalizing to consider what new possibilities would be opened to the school with $889 million available to the district.

A well-functioning campus is a vital component of each student’s academic experience and a point of pride for the community; to neglect communal responsibility to support the schools is to neglect the community’s reputation.It is imperative to remember that one’s decision regarding funds for education will be reflected in future generations. Today’s decision determines tomorrow’s workforce. Current students will establish the future standards placed upon society. It is preferable that these standards reflect high expectations and competitiveness, values instilled during youth’s school years.

Amy Hanacek declared “I personally believe that our aging facilities do not reflect the values and priorities of our communities- we are a community that demand the best for their (our) children.” As a competitive and prosperous community, such values should be reflected in quality of education, the basis of youth development and a societal cornerstone.

While Triton Times respects difference of opinion and understands the current bond is not perfect, it is important to keep the monumental significance of education in mind when voting for or against Measure M this November 8th.